Dismissing an employee with a disability - Case Study Dismissing an employee with a disability can be fraught with danger, particularly for small businesses who lack the resources and knowledge to deal with disputes. The penalties for making a wrong decision, or not following the correct processes, can be run into many thousands of pounds.  The need for robust HR procedures has been highlighted by Government data, which shows that employment tribunals has gone up by 13.42% since the Covid-19 pandemic (2020/21). The increase of 1,353 to 117,926 tribunals reversed the 2019/20 figures which saw a 14.13% fall to 103,973. The top three types of tribunal cases were unfair dismissal (23,904), working time directive (20,867) and unauthorised deductions (17,816). Not surprisingly, unfair dismissals came top due to the unprecedented changes to the employment market due to Covid-19 and the subsequent lockdowns. Similarly, complaints around the working time directive were most likely down to employers asking staff to work longer during the pandemic. 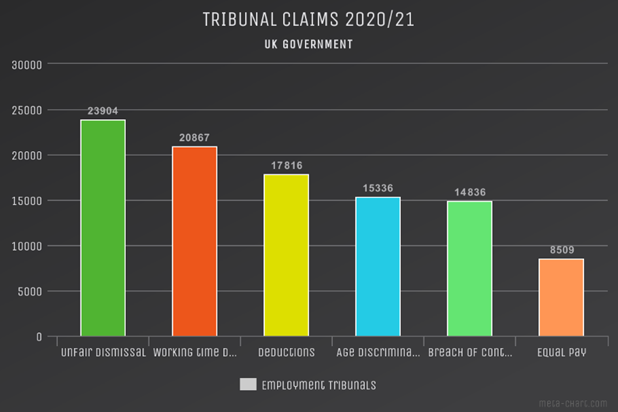 Recently, I was asked to deal with a sensitive case involving an employee with mental health issues who was making false claims of sexual harassment in the workplace. My client was understandably upset, so the matter needed to be dealt with sensitively and quickly. The posts, on both Facebook and LinkedIn, contained graphic claims of sexual harassment by two members of the company’s senior management. The false claims were all over social media and were obviously damaging the reputation of the business. Action needed to be taken immediately.

Dealing with the social media posts

Before we could think about the process of dismissing an employee, I needed to find a way to get the harmful social media posts taken down. The priority was to protect the reputation of the business before more harm was done. But would the employee respond, and who else should I contact? Firstly, I sent a request to the admin teams of both LinkedIn and Facebook explaining the situation and asking them to remove the offending posts. I also worded a personal request to the employee making the false accusations, as well as her next of kin as listed on her staff record. The result was the content was removed from social media, limiting the amount of damage caused to the company. Next, I tackled the issue of gross misconduct…

Technically, there is no legal description of gross misconduct. However, the Government does use the following wording: “theft, physical violence, gross negligence, or serious insubordination”. Any behaviour that destroys a relationship between an employer and employee can be considered gross misconduct. For the avoidance of doubt, I recommend that employers spell out the types of behaviour they would regard as gross misconduct. These should be included in the contracts of employment and the staff handbook, making clear that the list isn't exhaustive. Doing this means the company has a defence if faced with an unfair dismissal claim. Gross misconduct nearly always results in a company dismissing an employee. Examples of workplace breaches include heavy drinking or drug use, physical violence, serious health and safety breaches, bullying/harassment and discrimination.

In the case I mentioned, the behaviour definitely constituted gross misconduct, so my next task was to ensure a fair investigative process. This involved speaking to all sides to determine the facts, even though the social media posts provided clear evidence. The investigation proved the allegations to be false and vexatious. Due to the seriousness of the incident, the employee would normally have been suspended on full pay while the allegations were looked into. It is important to state that suspension does not imply guilt, it is simply a holding period before a formal decision is made. In reality, suspension is also a helpful tool to prevent further misbehaviour and to avoid contact between the affected staff members. In this incident the employee was on sick leave so suspension was not necessary.

The aim of the investigation is to determine the facts of the case and to assess the damage to the business. To do this, we monitored social media to see if any of the harmful posts were picked up by the press or had received negative comments. Reputation damage is covered by the law of defamation, libel and slander. People often get confused by these terms, so here is a helpful definition:

In normal circumstances, the process of dismissing an employee for gross misconduct would be relatively straightforward. However, in our case things were complicated by the fact the employee had bi-polar and also suffered from post-traumatic stress disorder (PTSD), which could have been a contributing factor to the bad behaviour. We needed to tread a careful path if we wanted to avoid a tribunal claim. This is because section 15 of the Equality Act 2010 gives employees with a disability (such as a mental health issue) added protection. This put pressure on the employer to show that they did not treat the employee unfavourably because of their disability. For misconduct cases when an employee argues that their behaviour was down to their disability, an employer needs to do the following:

In our case, a referral had already been made to an occupational health expert for other issues and a third party conducted a full investigation. Only when you are satisfied that you have all the facts, can you  then proceed to the hearing.

Once the investigation was concluded, it was clear that the employee had indeed committed gross misconduct. However, during the period of carrying out the investigations the employee resigned.  Their resignation was accepted with immediate effect and paid in lieu of notice. The next step would be to inform them of the allegations they faced and invite them to a formal disciplinary hearing. The aim of a hearing is to hear the evidence from the employee. Detailed minutes of the proceedings should be made and any new evidence should be investigated promptly. When the hearing ends, take some time to review the evidence before making a decision. An immediate verdict can give the impression of a kangaroo court. As mentioned, in our case, as the employee had resigned, we informed them in writing, of the decision, i.e. that the allegations were unfounded and evidence gathered proved their allegations to in fact be vexatious.

Should the employee still be employed then you would need to set out the reasons behind the decision and the appeal process. Following a fair and reasonable disciplinary procedure, will allow a  company to dismiss them without a notice period. As with every dismissal case, it is important to keep written evidence of all the proceedings to ensure that they were carried out fairly and in accordance with the law.

Dismissing an employee with a disability is never straightforward, so businesses should seek professional advice. JT HRConsultancy is an established HR services company based in Bedfordshire with clients across the UK. If you need help of advice on an employment issue, call me on 07715 026128 or email jo@jt-hrconsultancy.com

15Jun
Dismissing an employee with a disability? Read this blog first!
13Jul
Is it wise to keep an employee on longer when they know they will not be confirmed in their probationary period?
Comments
07715 026128
Bedfordshire, Dunstable, United Kingdom